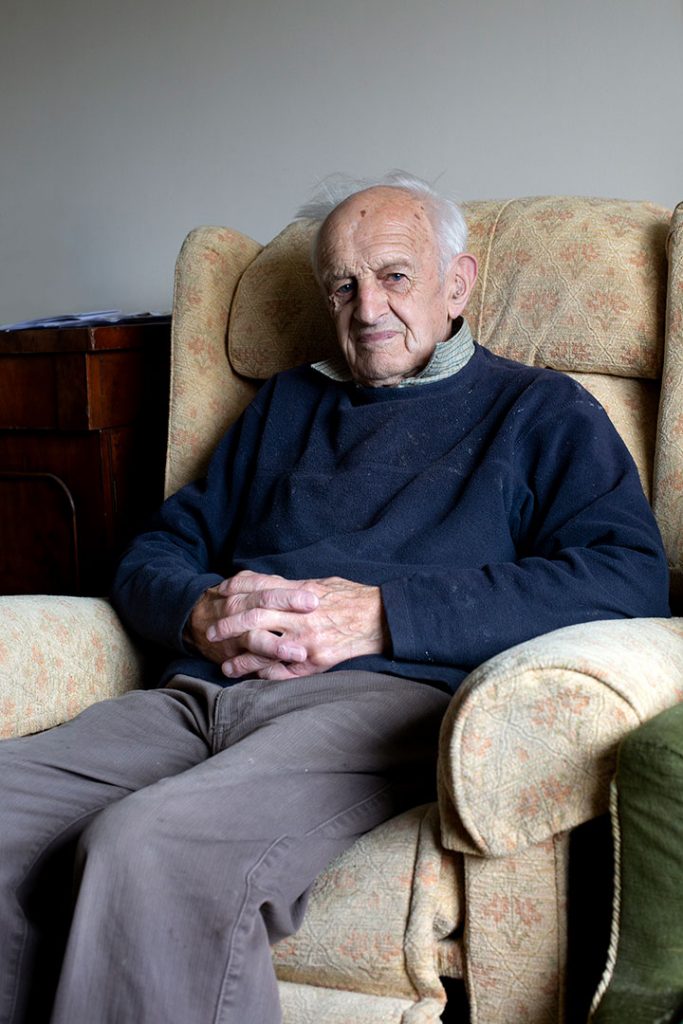 Tom was nine-months-old when his parents took on the tenancy of Thingley Court Farm, on the Methuen Estate.
He attended Cannon College in Chippenham and took his certificate just before the second world war.

Tom intended to go on to the Royal Agricultural College in Cirencester, like his older brother, but war broke out and he started work on the farm.

“Father was milking about 20 or 30 cows then, the short- horns. A short-horn would produce perhaps five, six, seven litres at the most. Friesians would produce eight, ten, twelve litres. They needed better management as well, better feeding.
When I was at school we were still milking cows by hand, until about 1941 or 42, when we installed a bucket-plant milking machine. Then I was able to milk the cows with a machine that would’ve take three of us to milk by hand.

This was on Thingley Court Farm. We were able to buy the adjoining farm, Thingley Farm in 1954. We had about 300 acres across the two farms. We ran the two farms as one unit. My father, brother and I working together.

Our farm was part arable and part dairy. Most farms around here had some arable. Farms have got more specialised and so much bigger, and the farm equipment has got massively bigger.
Technology has moved on so much. When I started we didn’t have sprays or fertilisers, we didn’t have a tractor until 1938. We were ploughing with horses until then. Father bought an Allis-Chalmer Model B, brilliant little American model. Father had done planting with horses but my brother and I had the tractor.

We were able to increase the herd from twenty-odd cows up to fifty. We bought more Friesian cows and developed from there. The first cow that we bought, she had two daughters. The first daughter, we nearly lost her with calving a big bull calf. After that she had seven heifer calves in a row. Which was brilliant, it enabled us to expand the herd quite quickly. And from that one family, until the time I retired in 1992, we’d registered 500 animals from that one family. That one family produced 500 descendants.

Before the war we kept quite a lot of pigs, and poultry as well. Father and mother kept a lot of poultry and it really kept the farm on its feet because it was in the depression times. They kept about 400 to 500 laying hens in a free-range system. The income from corn was no good. The milk price wasn’t any good either. Many farms were struggling, a lot of them went out of production. It was only the advent of the Milk Marketing Board that put some stability into the dairy industry, it saved the dairy industry.

Previous to that farmers had to negotiate a contract with various milk processors and, well, they didn’t have any bargaining power at all. You had to send your milk up to London in churns. Father had to take milk to Corsham station and put them on a train up to London. You had to get them up there by nine o’clock, and they had to be cooled. It had to be of high-keeping quality because there was no form of refrigeration.

We had to finish milking by seven o’clock to let it cool and then take it with horse and trap up to Corsham station.

The big milk churns held about 17 gallons, they were the devil to trundle about. Then they changed them to straight- up sides and about ten gallons became the norm. After the Milk Marketing Board were formed, they organised picking up from farms on lorries taking it to a central processor. There were several round here, Nestles in Chippenham and Unite Dairies in Melksham. At that stage we were milking about 25 to 30 cows.

Silage revolutionised feeding dairy cows. Farmers experimented with how to save green grass rather than make hay. So they cut the grass green and put it into a clamp and compressed it down, covered it over to exclude the air so the grass fermented and cured itself. And then they could cut it out and feed it in winter, but that was a very laborious job. Until we got everything mechanised.

There was more advance made in four years of war than forty years before it.”