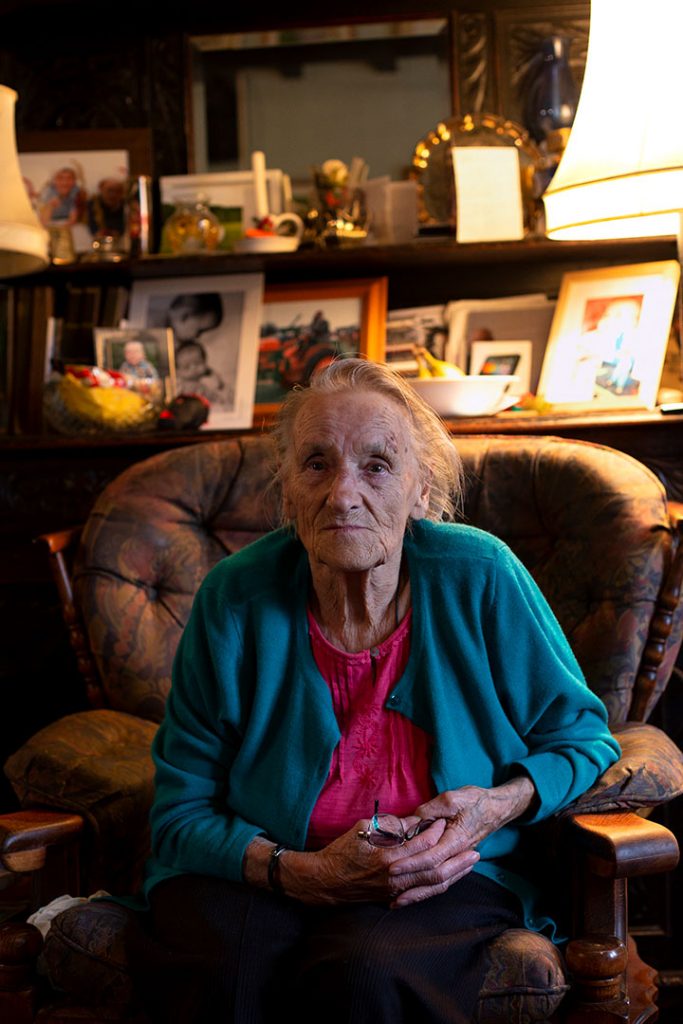 Pam is from a Chippenham farming family, as was her late husband Jim. Pam’s father served in the first World War. After the war, he was granted a few acres of land in the Frogwell area of Chippenham to start farming independently.
Pam worked in the bank in Chippenham for ten years from the age of 15. Jim worked on his father’s farm.

In 1961 Pam and Jim secured a mortgage and were able to move from Jim’s father’s farm to their own farm at Yatton Kennel. Pam still lives in the farmhouse.
“We lived in a caravan after we were married, and we had a baby in there as well. Four years in a small caravan. We couldn’t buy, we couldn’t rent. Every spare room was rented out to people.
Then four-and-a-half years in a bungalow that we built. Then we came here. This farm turned up. We had two young children, a girl and a baby boy. We took this farm on ourselves, just Jim and me. We were lucky to get it.

Six weeks it took to get married, to get the arrangements. The vicar let us have his two rooms to have a wedding reception. That was at two o’clock, and we left just after five, went down to Bournemouth for one night. Jim milked in the morning of our wedding day. He had the wedding-day afternoon off, next morning off, the next night he was back milking again. That was our wedding. Imagine how much
it cost compared with these years. We had our wedding and honeymoon in 24 hours, now they have 24 days, don’t they? We come out here and we milked cows for 13 years, no
holiday. When the children was small, after milking the cows in the morning, we went in the car to Weston-Super-Mare and come back in the evening, and milked the cows. That was our holiday for the year, that half day.

When we come here we started with about nine cows, anything we could afford. After the first year I started helping with the farming. We found that we were not repaying anything, not getting any better and we wanted more animals, so the man had to go, and I had to milk with Jim. And I loved it, I’ve loved my life.
It took about four years before things started improving. When I look back on the book, I see that I weened 600 calves. I had to keep a record of them and I have six-hundred names in the book. Every one was named and you could call their names, they knew their names.

The last ones we sold went to Cirencester market. We went up there to check on them. They put different tabs on the cattle when they’re up at the market and I was trying to find the numbers they put on their backsides. I put my head between the rails of the pens either side and a tongue come out and kissed me. That broke my heart. I wished I hadn’t gone. She picked me out of all the people that were there.
They were like family. A lot of them were our friends, we very often didn’t have anyone else to talk to from one day to another.

The cows used to get a beetle infestation in their eyes and they would go blind. We had one cow that went across the field and while she was over there both her eyes went blind through these beetles. I went across there because they were taking such a long time, I could hear a lot of swearing going on in the field. All the other cows had gone, there was just this one cow they couldn’t get out of the field. I went up and called her name and she followed me all the way, over the field, over the road, right down the drive to the shed in the yard. She stayed in there. When she wanted to be milked, she would follow me into the parlour, be milked and follow me back into the shed. She trusted me. She did that for a week until her eyesight came back. Broke my heart when she had to be put down. Something was wrong with her in the end. I just hid my head, I didn’t like to hear the gun go off.

We had to start milking at six o’clock in the morning. Come in here quick, had to have all the clothes ready for the kids’ school, and breakfast was ready for them, then take them into school. Come back do a bit of housework, get a bit of dinner quickly and then go out. If it was hay-making time, drive the tractor round, and I did all the mowing for the silage. Yes, I loved it.

I would always have to take the meals out to Jim working, his midday meal. And we’d sit on the tractor. Someone down the village said, ‘I used to really admire you two, it was really romantic, you two sitting up eating your dinner together.’
It was just necessity to keep him going!”