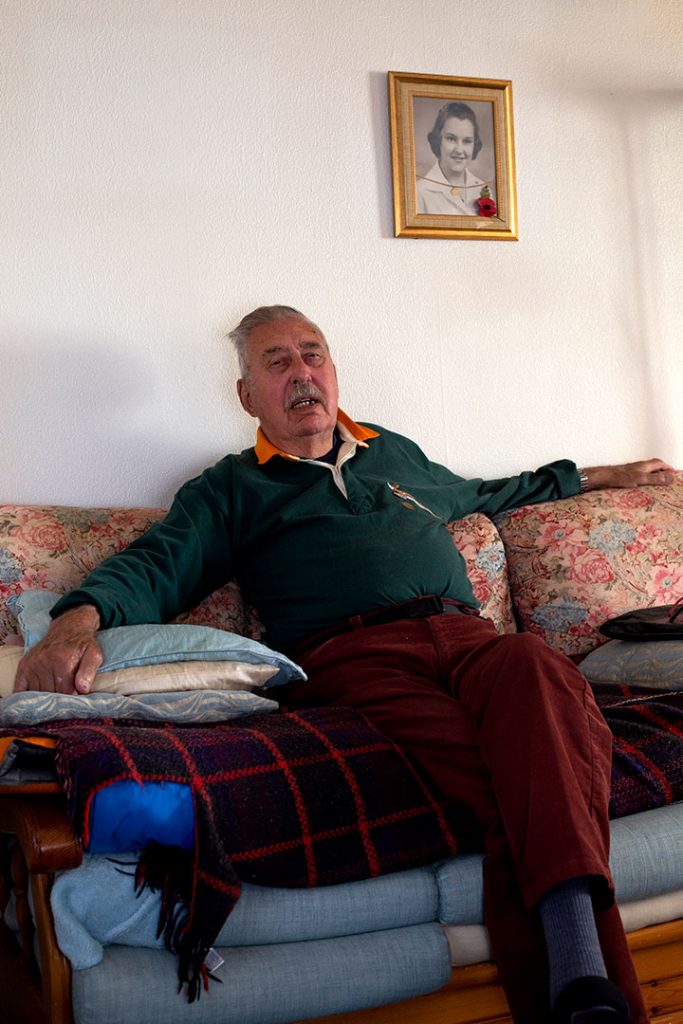 Leo spent his childhood in Lacock. His father was the groundsman for the abbey and when the National Trust took custody of Lacock, the family moved to the lodge house.
Leo attended Chippenham Grammar School. He was 15 when he went to naval college, and 16 when he embarked on his first voyage for the merchant navy.

Leo served in Thames River Police from 1960 to 67, but returned to the merchant navy until he retired aged 64.
“I had some experience of the agricultural profession because we were friends with the farmer at Manor Farm, Lacock. I’d help there, hang around and do what I could at busy times of the year, harvesting, haymaking and that. But then I decided to embark on the seafaring profession. It’s true that seafarers need knowledge of all kinds of skills and trades, including the agricultural trade. I had experience of the barley trade, we do export quite a lot from this country. Usually keep the malt barley in this country for the important products.
Carriage of animals was not just farm animals but circus animals. There was a notable occasion when they had three elephants and lost one of them. How on earth you can lose an elephant? But on the manifest, or bill of landing, it said, ‘Three elephants, one in dispute’.

The first voyage, we stopped at Cape Town, this was the 1950s. We were on rationing in England. I sent a parcel back; a ham, and tins of pineapple, from South Africa, to my parents in Lacock. They thought, ‘This is wonderful’. I don’t think they’d had pineapple. Before the second world war they’d had bananas, but they were a rarity. It was an event when my father could get a banana.
We had one ship where the captain and the chief steward were at daggers drawn. They’d been at sea together on another ship. I don’t know why the company decided to post them on the same ship again when they disliked each other so much.

In the second world war, they’d been torpedoed and the ship exploded, caught fire and the captain said to abandon ship. The captain got away. The chief steward and the chief cook were in another boat with some other crew and they got away. But when they got off the ship the weather got more rough and the captain was swept away from the vessel. The steward and the cook got their heads together and said they should’ve opened that bonded store where the cigarettes and whiskey were kept. They managed to get the lifeboat back and get aboard. The weather got worse and that lifeboat got separated from the ship leaving the chief steward and chief cook aboard a burning vessel. The weather calmed again. They were taken in tow by an admiralty tug, or something like that, to somewhere near Clyde. They both got medals for standing by the vessel. The captain got nothing because he abandoned ship.
I was in the Met for seven years, the Thames division River Police. I’d had some useful previous experience. I came down towards Westminster Bridge one night. The central arch was the one where the bigger vessels went through.
They had a light over each arch to show it was open for traffic. I had two crew in the boat with me. Midnight, one of the crew said to me that the lights were out on the bridge. I said they were not. There was a ship coming up the river on the tide giving them maximum depth underneath. It was a Dutch coaster with a flat top. He just touched the bridge and the tide swung him round across the river so he blocked the arches and the whole of the ship had covered the lights on the bridge. I pulled the boat alongside and climbed aboard. Went down to the captain’s cabin, nobody on the bridge. Ship was held there, couldn’t get it off. They knew what to do, they were North Sea seafarers. The captain was in there, he had a bottle out. He said, ‘Fancy a drink sergeant?’ I said, ‘Yeah, I don’t mind.’

I shouted down to the chaps in the police boat to take our boat back to Waterloo Pier, I’d stay with the captain. I asked the captain where he was heading and he said he was heading for the River Wandle, Wandsworth. There’s a little harbour there, adjacent to Youngs Brewery. They were delivering barley. Then one of the crew comes in and says the bridge is moving. It was the ship being pushed off the bridge by the tide. I said, ‘I’ll take you up there if you like.’ I knew the river anyway so I went up on the bridge, got behind the wheel. I steered her to the River Wandle and got her alongside and tied up. Didn’t get any payment for it, just did it for the sake of doing it.”