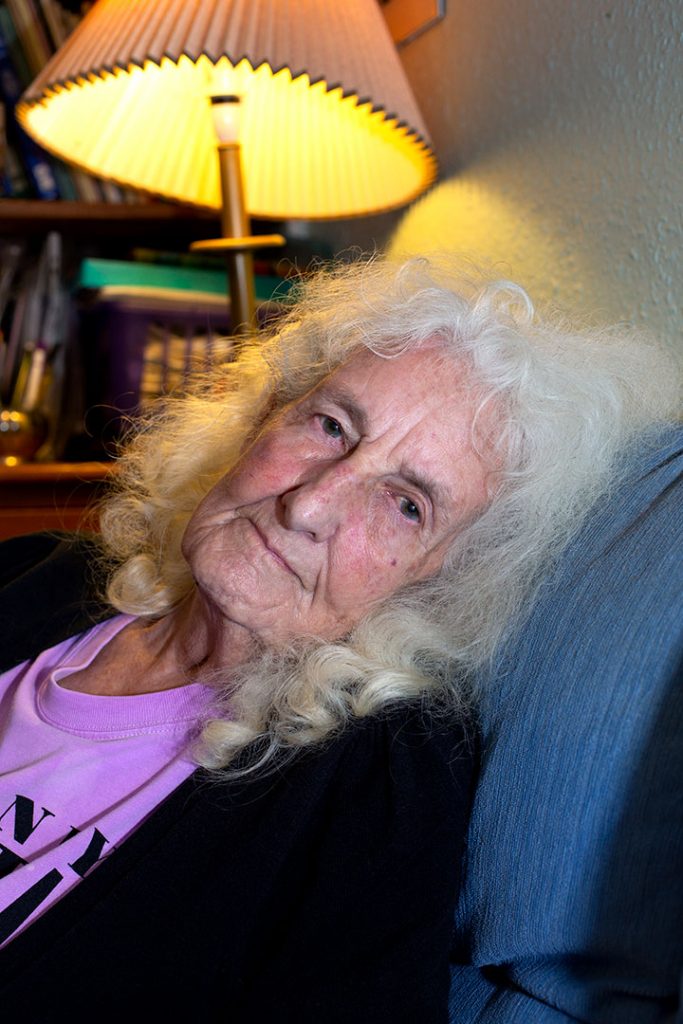 Josephine attended Miss Bailey’s school on the high street in Corsham from the age of four, before moving to the Pound School, age 11. She completed her education at the Victoria Technical Institute, Trowbridge, aged 15.

Josephine’s father, Harry Rossiter, opened Priory Stores in 1948, a general trading store supplying Corsham with everything from army-surplus goods, hand-made toys, to cigarettes and vegetables.
“We had this shop, my father opened it in 1948 after the war.

He sold anything he could get his hands on. We used to love it and the people used to come in all the time and we got to know lots of people. The ladies who used to work in there, one of the ladies is still around, she lives behind the launderette, Barbara Sorter, she’s still around.

I worked in there from when I was about seven or eight, I used to enjoy it. We used to have to weigh up potatoes and all that.

People used to come and have a good chatter. We’d sell cigarettes and people used to come in for five at a time, they couldn’t afford any more. People used to come in the shop and cry ‘cause they didn’t have any money to buy anything. A lot of the men used to go out to work and then go down the brewery, just a couple of doors down, and drink all the money. The wives never had any money. They were always crying to my father how were they going to fend for the kids and that.

We used to have one man come in from down the road and he always used to put things in his bag. We used to have to say to him, ‘David, and the stuff in your bag then’ – and him, ‘Oh, all right then all right.’ We had some odd customers one way and another.

My father used to open the shop Christmas day even. And we were open until ten o’clock at night. Busy life. My mother worked in the shop. She was always busy, never stopped. She used to come up about ten o’clock at night and cook supper, well cook her and my dad supper, and us if we wanted it.

All the children used to come in the shop. My father used to make ice lollies. We had a big fridge up the garden in the shed. It was like a spin dryer and it used to make ices. We had a big ice lolly thing and we used to bash it with a hammer to chop it into lumps. They used to come in for penny-ice-lumps, held them in a clump of paper, maybe newspaper. All different flavours, raspberry, orange. It was like dried flavour in a stick, proper bought stuff. The kids loved it.

We were on the way to the Regis School so they’d pop in on their way. Often people say to me about it now.

We used to sell anything people needed, cigarettes, vegetables. We used to sell meat. One day, my father couldn’t spell very well and he wrote on the shop window in white writing, ‘tender lions’ instead of ‘tenderloins’. Everybody was laughing.

We used to sell Harris’ pies and bacon. My father used to have pigs in the garden where we lived and send them to Harris’ factory in Calne and they’d kill them and give them to us. My father used to boil the ham and we’d sell that from our own pigs. We used to have a bacon slicer, people would come in for a quarter of ham and we’d cut it there and then. Keep the ham on the machine and put it in the fridge at night. We had a big walk-in fridge went out into the garden. You had to make sure you didn’t get locked in there, you couldn’t open it from the inside.

My father was always up at six, out in his workshop, fiddling about doing all-sorts. He used to make toys at one time, horses to push along, and sell them in the shop.

My brother-in-law and sister took it over and went there to live. I think it was going until about the turn of the century. Various people worked in the shop and became friends.”