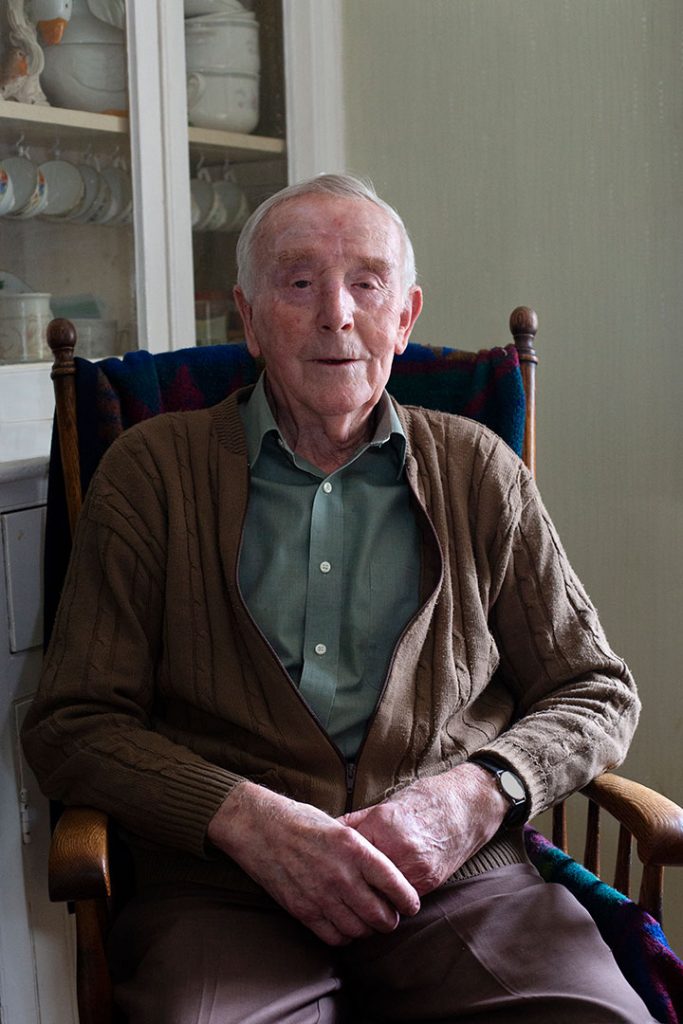 Geoff was a tenant farmer at Great Lypiatt Farm, Neston. His grandfather took on the farm tenancy in 1902, followed by his father in 1928. Geoff held the tenancy from 1969 until he retired in 1995. Geoff ’s sister Marjorie, married Robin Mortimer and they moved to Ridge Farm where they were also tenant farmers.

Tragically, Geoff ’s son died in a car accident at the age of 21, shortly after he graduated from agricultural college.
Geoff ’s grandfather bought a house on South Street, Corsham, where he lived after retiring from farming. Geoff ’s parents moved to the same house on their retirement, and Geoff lives there now.

“Milk was our main output on the farm. In the wartime we kept pigs and poultry.
We used to collect swill, cooking refuse from people’s houses. We used to have metal bins all round Neston and Corsham that we emptied every week then took it home and boiled it up and fed it to the pigs. I’d collect them with car and trailer but it got bigger and bigger so I had to go with the tractor and trailer in the end. It was alright during the winter but summer the bins used to get mucky and we’d have to wash them before putting them back. All extra work.

All those houses had pigsties up the end of the garden. They’ve been converted into sheds now. It was the only way they got meat.

During the war, the WarAg used to go out to the farmers and tell them how much they had to plough and what to plant. If you weren’t working the ground properly they would turn you out and commandeer the ground. That man that used to see to us, he was a broken-down farmer, old Potter. He didn’t have a clue about farming and yet he went about telling us farmers how many acres we had to plough. He wasn’t a very popular man, I can tell you. And then he’d hand it over to the WarAg and they’d come and plough it for you, to make sure they had it.

At that time we also had a lorry business. We were the ones who had to go out and collect all the dead cows that got killed by enemy action. They shot the cows. We had a hand winch to pull them up in the lorry. Bloomin’ hard work that was to drag them up into the lorry. Then we’d take them to the slaughterhouse. But the throat had to be cut soon as they died, if they hadn’t, they had to go to the knackerman then because it’s not fit for human consumption. Shows how hard up we were for food.

The soldiers, from the Wiltshire regiment in the Great War, when they came back, those that came back, they set them up on the farm, Fuller did. Set them up with smallholdings. They had a saw mill down by Neston House, used to make all their own timbers. They were all wooden buildings with tin roofs. They were proper smallholdings with about 35 or 40 acres. They were dotted about in Neston parish. When those people died they added the smallholdings onto Lypiatt Farm because we were the central farm. That’s how we got up to 250 acres.

Mr Barnes, he was from the Isle of Wight, he heard about a tenancy of a little farm behind our cottages at Lypiatt. He walked three cows up from Southhampton and he started a milk round in Neston. He had a tricycle with a little carriage behind with a milk churn in. He used to go round, and women would come out with their jugs. He had three measures a gill, a half pint and a pint, all hung inside this churn. He was a real character.

We used to have a holiday, a fortnight in September, when we’d finished corn harvest. We had a tent for years. Then we had the lorry, it was built for horses, it had a solid oak floor. It was quite roomy, we’d have the Morris 8, (we had two planks to run it up in the lorry) and still room for a double bed in front of it and space over the cab. We stayed on a farm in the Gower. They was highly amused when we turned up.

My sister Mar, she was a heck of a woman. Father would take her with him to buy cows. At stock judging she was amazing. When she and Robin moved up to the Ridge Farm, Father took her with him to choose their starter herd, five cows I think.
She was in the England team against America, stock judging, can’t remember the year, but she had a week’s training, up in Penrith. Trouble was she was diabetic. My mother was terribly worried all the time she was gone. Then they did the competition. Pick the best cow, the one you consider the best and give reasons why you chose that one and then you were marked on that.

They actually beat the Americans, that really chuffed her.”