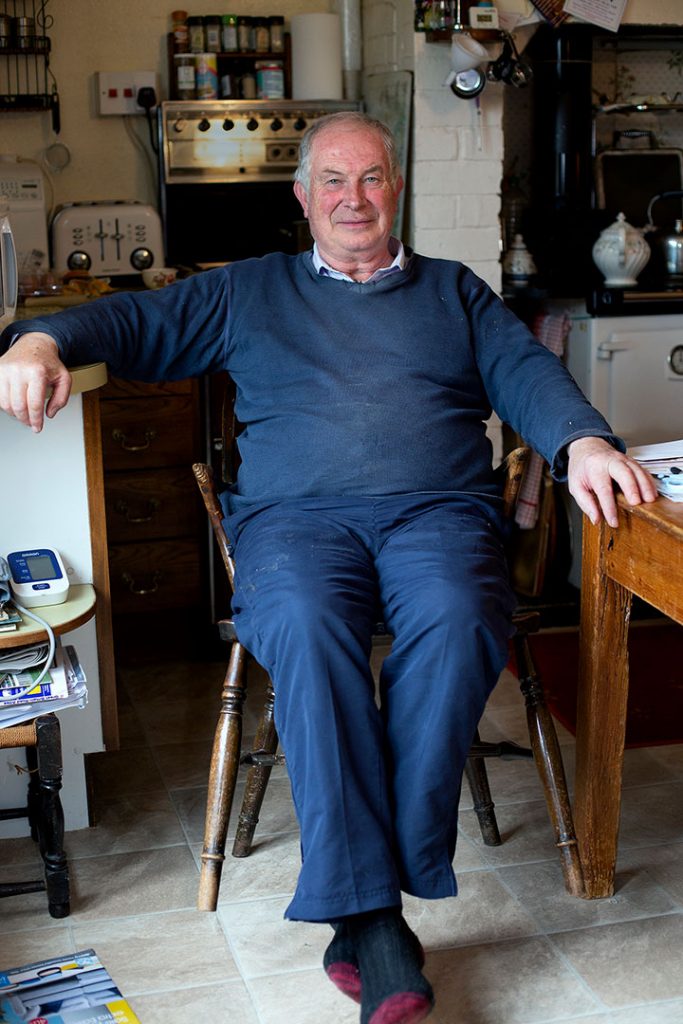 Chris’ grandparents married in 1912 and moved from Trowbridge to take on the tenancy of a 140-acre farm at Bowden Hill. His grandfather later bought Reybridge Farm, 140 acres, from Lackham Estate. He also took on the tenancy of 250 acres at Selves Farm, part of Spye Park.

“I can remember the wonderful time I had when I was about seven or eight at corn-thrashing time. With a stick that was nearly as big as me. I had a big duffle coat on and string tied round me trousers, so no mice or rats could run up me legs. There was three of us, Malcolm Heath and Chris Baker and me. We used to get a penny a tail, which wasn’t bad money in those days. With the ricks, as soon as they picked up a sheath of corn, there was rats and mice everywhere. The best day I ever had, I had 49 tails. So I did very well.

Hay was made in May, June, July. It was all very labour intensive. My grandfather used to say, ‘I’m not wasting anything.’ And he’d get a horse-rake and we’d go over the whole field, and into the corners with a prong, and row it up.
At the tender age of eight, I can remember being in charge of a great big horse called Snowball. I was left to it, going up and down the field with a carthorse raking the field.
My grandfather was very religious. There was no way that anybody worked on a Sunday that didn’t have to work. The cows had to be milked, and the animals had to be fed, but anything that didn’t have to get done, didn’t get done on
a Sunday.
Women then, their job was in the house, bringing the family up. We had a number of people working for us that had families of eight, nine, ten, twelve. In fact we had one family of thirteen, and they were living in a two-bedroomed house, the girls were in one room, the boys were in one room, sleeping head-to-toe. The father worked for us, plus four or five of them worked for us. The girls all married locally. A mother’s role was to look after kids and the house and the garden.

Bowden Hill then must’ve been a wonderful community. There was 50 houses but there was a lot of people. The parish room was quite a focal point. My grandmother set up the WI. Every Saturday there was something going on, and they’d have dances occasionally up there. In the summer they’d make a cricket pitch on the bottom common, and tug-of-war was also popular.
During the war we had the Home Guard, a unit at Lacock and one at Bowden Hill. A lot of them were provided by the Bowden Estate, and a few from our farm, including my father. He’d tell me they’d be on guard on the top common every night, taking turns. For the first year or so they didn’t even have any weapons. They ended up with rifles. One early morning in the summer, a flock of crows came over. They thought, ‘Shall we?’ And they thought, ‘Yes, we shall.’ About five or six in the morning and the guns went off shooting the crows. Everyone on the hill thought the Germans had arrived.

Life did change after the war considerably.

In ’65 they updated the parlour with a Herringbone system, 14 cows come in, seven on each side. Things started to speed up.
It was also the first time we had a bulk tank, that refrigerated the milk. I can see it now, it came in the yard on the back of a car. It was about the size of a dining table, a 300-gallon tank. My grandfather turned to father and said,
‘David,’ he said, ‘Why have you bought such a big tank as that? You’re never going to fill it.’ I’d love him to come back now because we could fill that tank 12 times a day. Milking became a pleasure to do then.

My grandfather was a stickler for time. When he came to work he always wore a suit with a waistcoat, and he had a massive fob watch with a gold chain. He’d always be in the yard to see the blokes in. They called him Clocky.
My father died in ’91. It was just the start of the revolution in computers. He did everything on the back of a fag packet. How farming has come on in 27 years has been phenomenal.”